Why you should replace your air sports carabiners more often.
The lives of paragliding and hang-gliding fans depend on them, yet they get way too little attention in air sports: carabiners. While clearly visible flying equipment like the glider or the harness is mostly replaced regularly and with pleasure, years of continuous use of the necessary carabiners is not uncommon and the importance to replace them on a regular basis is hardly known. For this reason, we talked to Markus Gründhammer, paragliding pilot and founder of the paragliding brand “Skyman”, about the right handling regarding this topic: Find out more about which immense loads carabiners are exposed to while flying, which carabiner materials and locks are suitable for flying and what you need to pay attention to when replacing your air sports carabiners. 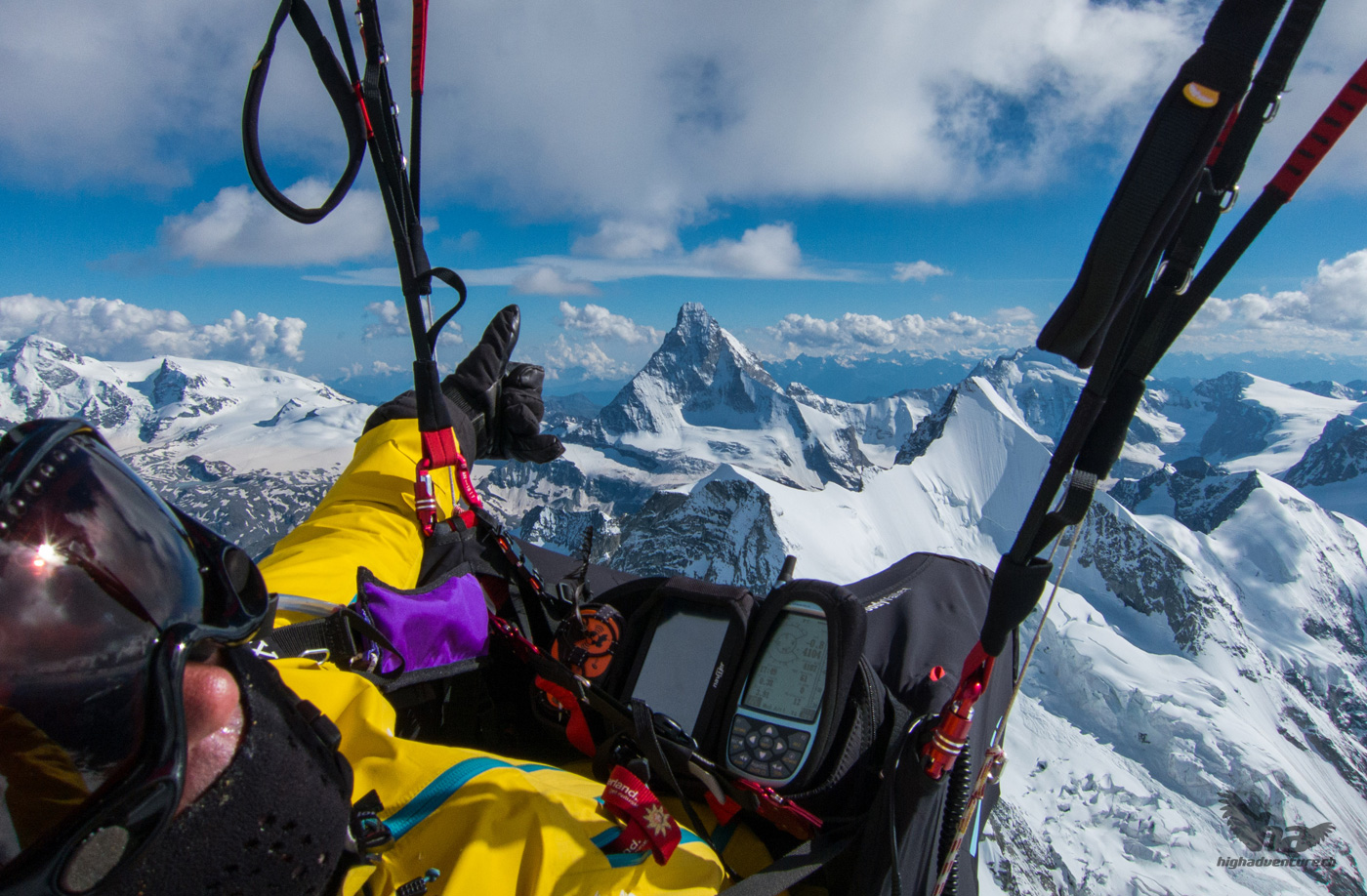 “Independent of the recommendations of every manufacturer, I replace my aluminium carabiners every year without exception. This is something I just need to invest in, my life must be worth it. Especially Tandem and Acro pilots (Acro = flying acrobatic maneuvers with a paraglider) have a much more frequent use of air sports carabiners and therefore the load on the carabiners is immensely higher compared to the carabiners of solo pilots – particularly when flying Acro, where extreme G-forces affect the carabiners. I am convinced that especially wherever money is earned and where passengers are transported, it should be obligatory to replace air sports carabiners on a frequent basis.” 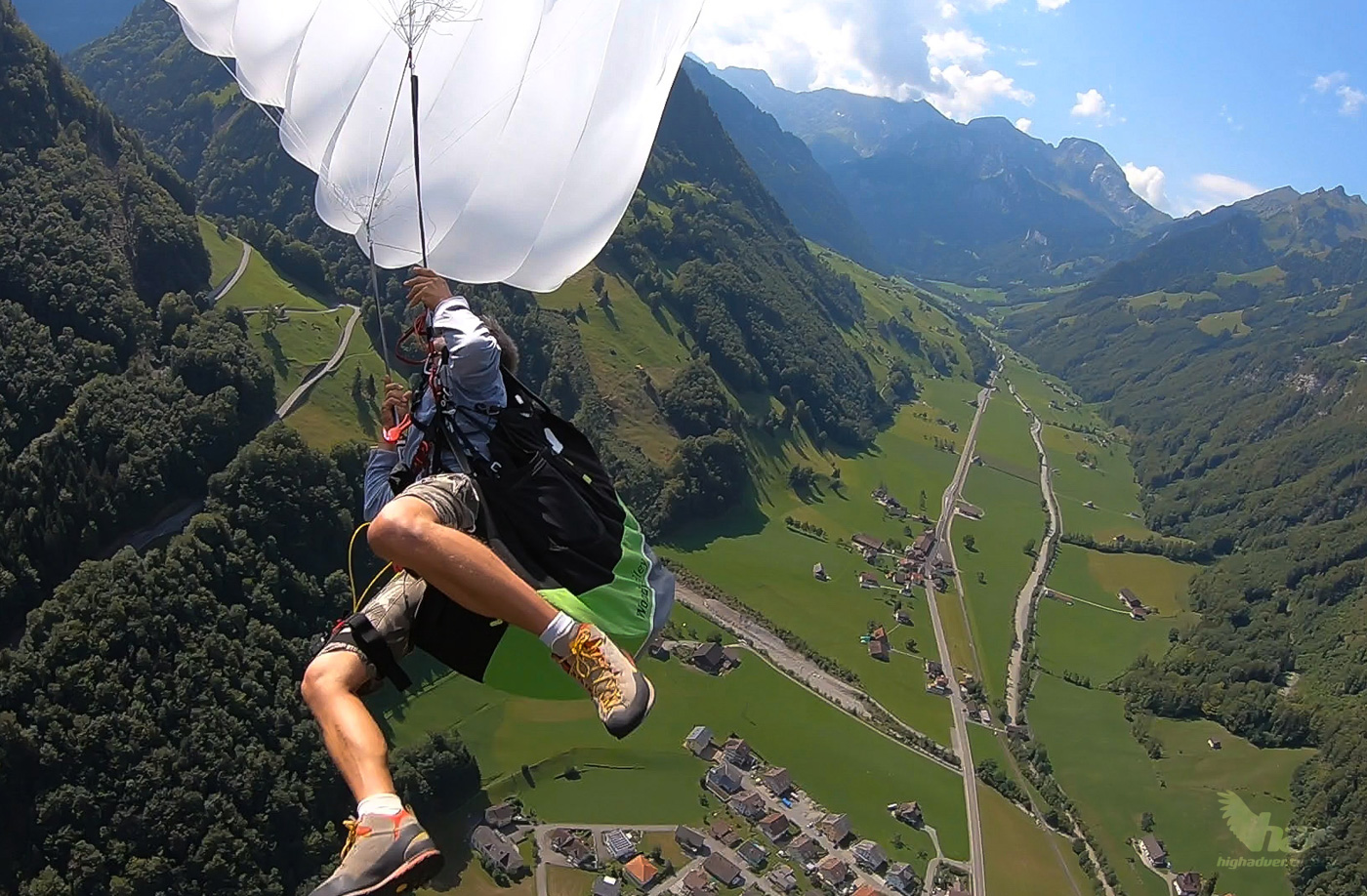 Aluminium or stainless-steel carabiners?
One of the first questions when it comes to choosing an air sports carabiner is what material it should consist of: aluminium or rather stainless steel? Because of the increasing demand for weight-reduced harnesses and gliders, especially very light air sports carabiners made of high-strength aluminium, which is also used for aircraft construction, are very popular. However, regarding the problem of constant vibration stress, it would generally make sense to opt for a stainless-steel carabiner. They are heavier, but due to their higher fracture strain, they can absorb more vibrations than an aluminium carabiner. Fracture strain thereby means the ability of a material to deform, which is especially important regarding the problem of constant load changes in air sports:

„Of course, it’s only about weight, especially when doing Hike&Fly (Hike&Fly = hiking or mountaineering and flying down) it’s important to carry as little weight as possible. If a stainless-steel carabiner had less weight, for sure everyone would prefer it. However, many Hike&Fly harnesses have a front container (rescue glider is placed in a little package in front of the pilot), which means that if in the worst case my carabiner or even both carabiners break, I will also loose my rescue glider, as it is connected with the carabiners.” 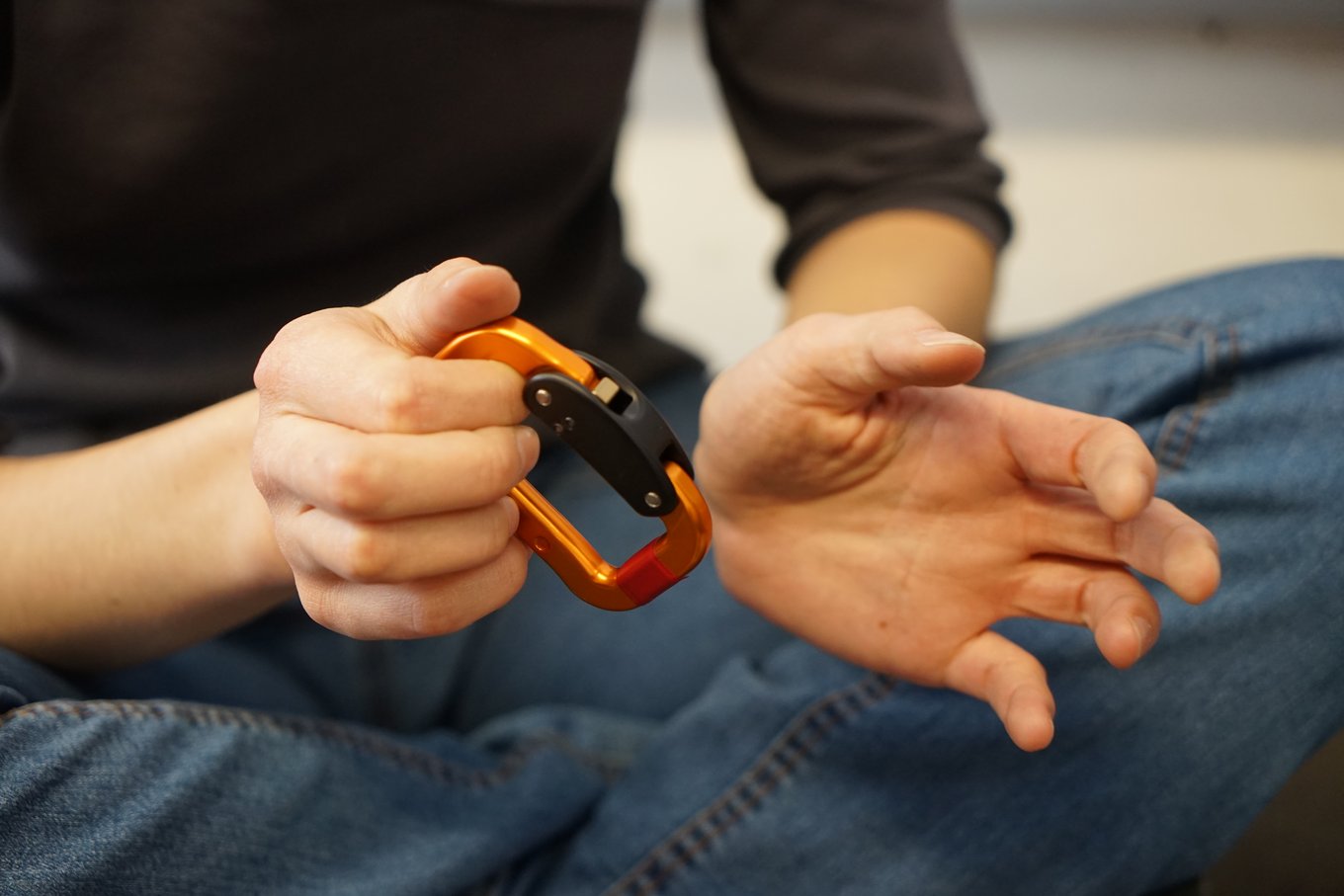 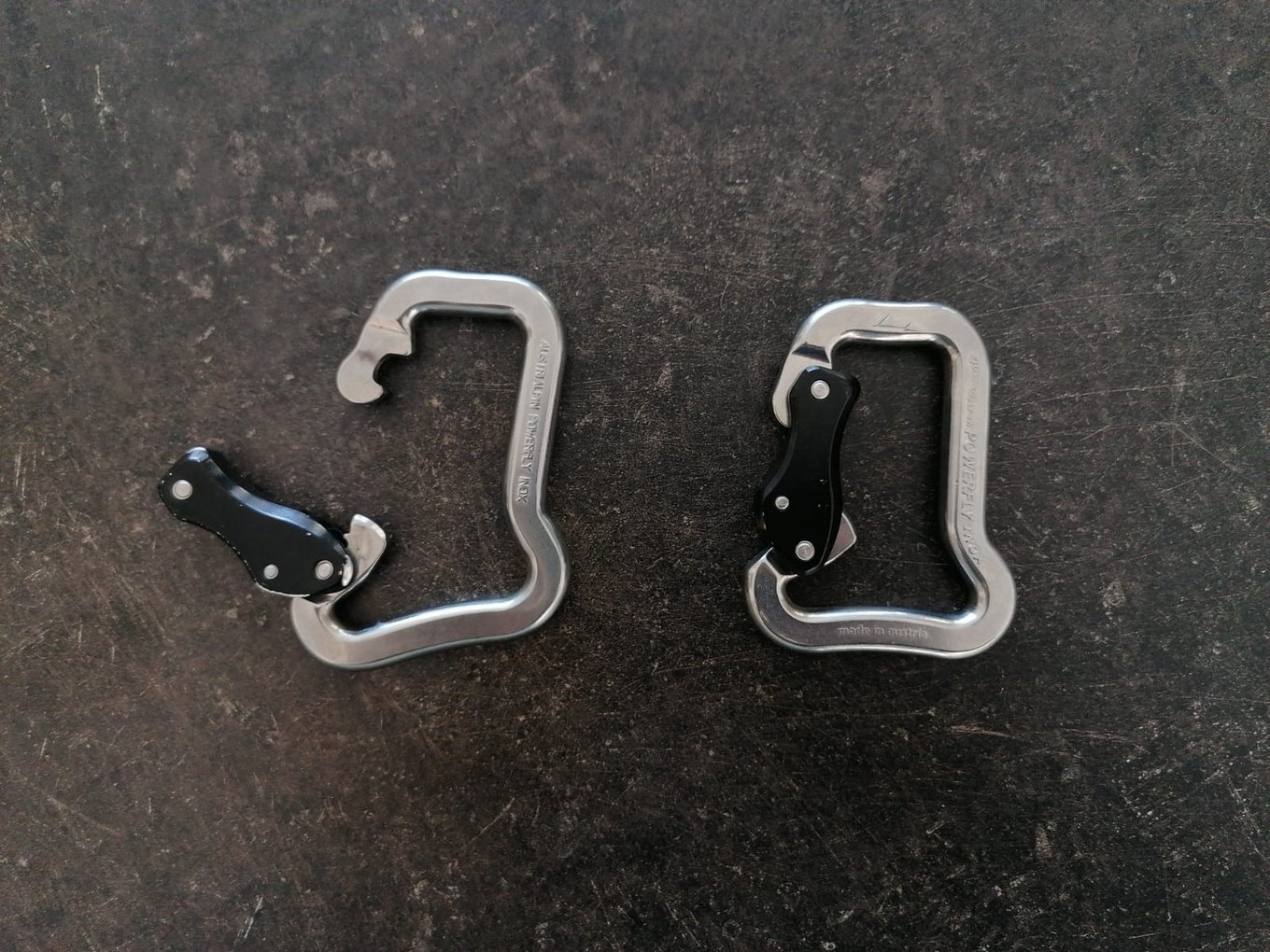 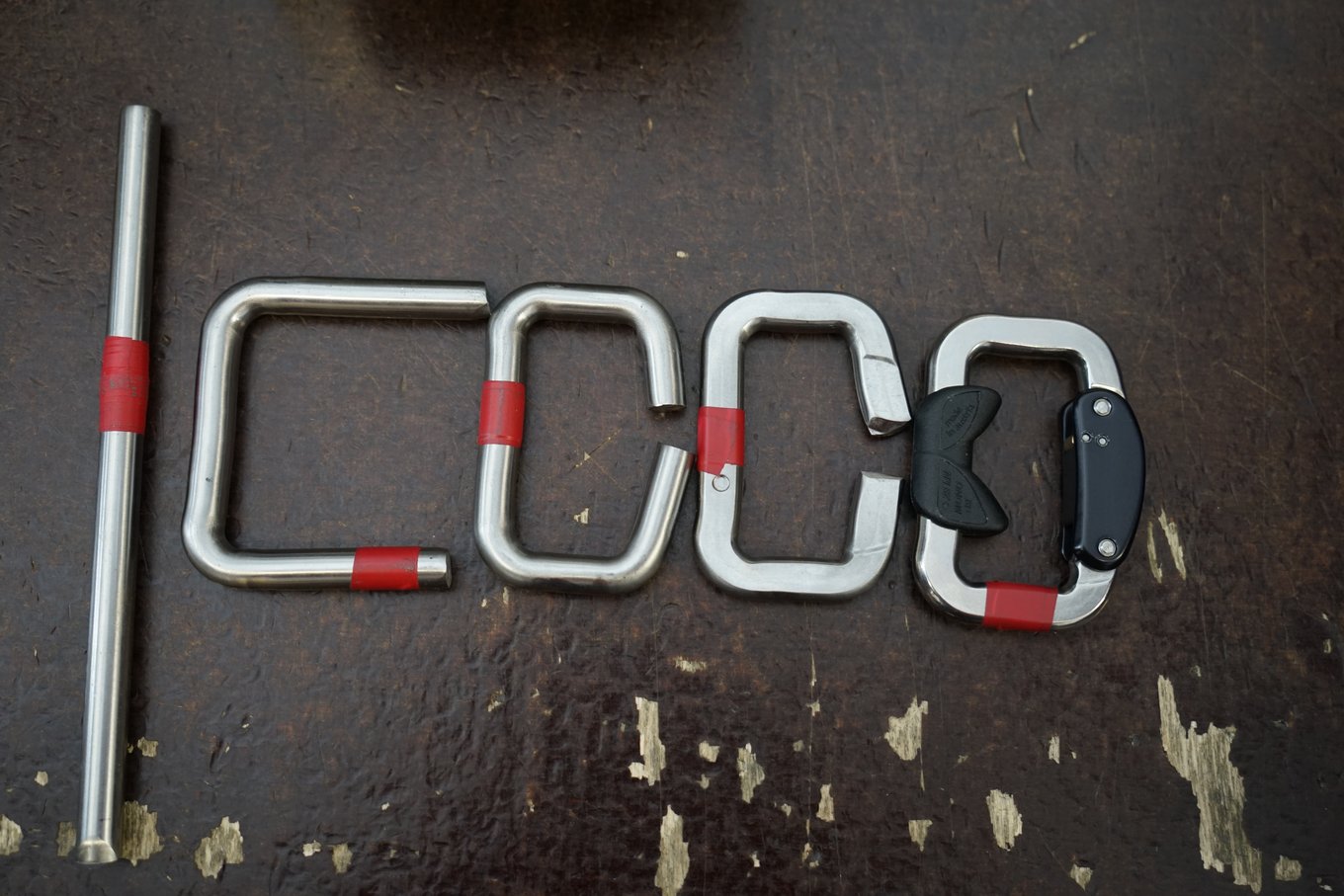 The suitable carabiner lock
As mentioned above, due to an uneven load distribution on the carabiner and a higher load distribution on the weaker carabiner side (gate side) during flight, also the lock of air sports carabiners plays an important role. In this regard, it is crucial to keep the gate play to a minimum and to make sure the carabiner doesn’t open during flight. Screw lock carabiners can open due to constant vibration; therefore, they are not suitable for the usage in air sports. In contrast to mountain sports carabiners, there’s no norm for air sports carabiners, therefore the problem of constant vibration stress cannot be checked through a standardized test. To guarantee the safety of the AUSTRIALPIN STRATUS carabiner with slide autolock, which was designed for 25mm webbings only, a specially defined test was conducted by an independent test institute. In this process, a carabiner is placed between the two fitting webbings: The gate play of this carabiner was kept to a minimum, this means that when exposed to a load, the weaker carabiner side carries some of the weight as early as possible. This way, load changes which weaken the material can be reduced to a minimum and an opening of the gate through vibration during flight is not possible anymore. A special plastic device (“keeper”) thereby makes sure that the webbings are brought into the right position and stay there. A lot of safety and only little weight! 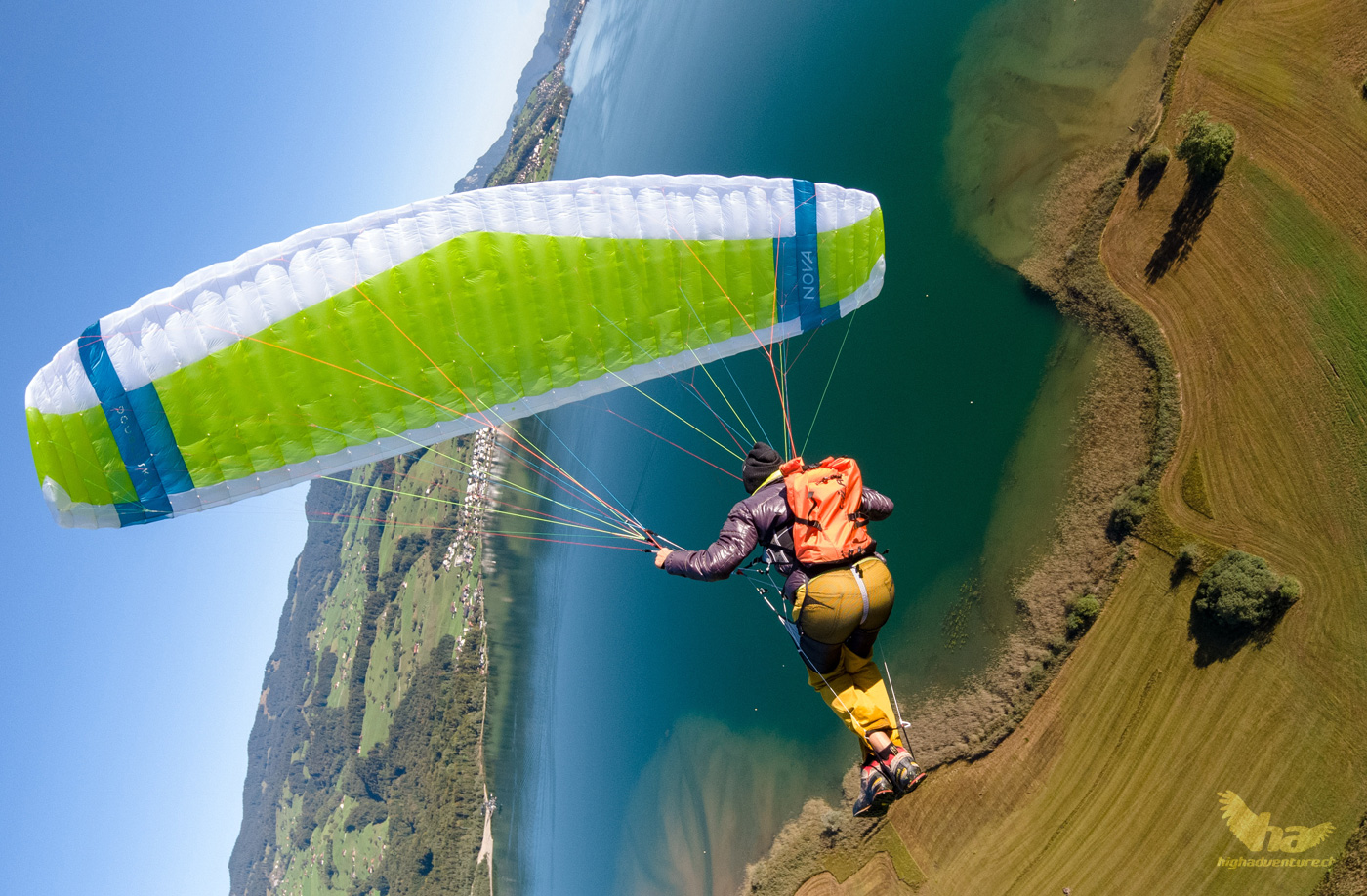 „The problem definitely is that pilots don’t know enough about the topic: Especially the problem of constant vibration stress should be communicated more in the media and in relevant magazines. “

says Markus Gründhammer to the question of why it can even happen that air sports carabiners are used for years (or even decades) without being replaced only once. So, what do you need to know when using air sports carabiners? When do they have to be replaced at the latest? For the usage of our air sports carabiners – no matter if made of aluminium or stainless steel – we recommend replacing them after 1500 flying hours or after 5 years, whichever falls earlier. “In case of contact with sea water and/or sand, I rather replace the carabiners right afterwards anyway”, says Markus. Moreover, it is important to mind the right webbing size: AUSTRIALPIN guarantees the given breaking load only when used with the right webbing sizes. Also, a distinction has to be made whether an AUSTRIALPIN carabiner is only suitable for one person (MONO) or for Tandems (BI) – Tandem flights are only intended for harnesses with Tandem-suitable stainless-steel carabiners.

When did you last replace your air sports carabiners? Have you ever replaced them at all? In case it is high time, we hope that we were able to motivate you to replace your carabiners and to handle this topic more consciously in the future. Do you still have questions? Keep them coming! Just send us a message on our social media channels or write us an e-mail to office@austrialpin.at, we will gladly help you with everything!

In this sense: Have a good flight! We wish you unforgettable, beautiful, but especially moments in the air!

In our shop you will find a selection of carabiners: shop.highadventure.ch

Attention: To be exchanged after 1500 flying hours or 5 years from first use!